Base64 is a common encoding scheme. But what is it, why 64 bits and how does it work?

Base64 is a binary to ASCII encoding that takes a byte (8 bits) and chunks its down into segments of 6 bits - six ones in binary equates to 64 which is where it derives its name.

Let’s look at an example using the three letter word “The”.

This tabulated data below shows how the word ‘The’ is represented in both binary and base64. Each letter corresponds with an integer. For instance, ‘T’ is mapped to the number 84. This is then converted into binary, and the entire word ‘The’ can be expressed in three bytes.

While binary takes 8 bits, base64 only accepts 6. This means that the last two bits are clipped from the end and become the first two bits of the next segment.

Now that we have base64 binary we can calculate the base10 integer. This is done so we can map that integer to its base64 character.

Or, a graphical representation for mobile users. 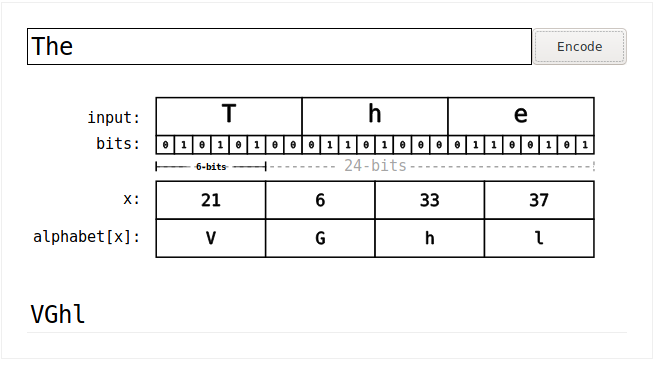 Character to value conversion chart for base64. By cross referencing the binary representation of the four segments (21, 06, 33, 37) we get the ASCII characters; VGhl. 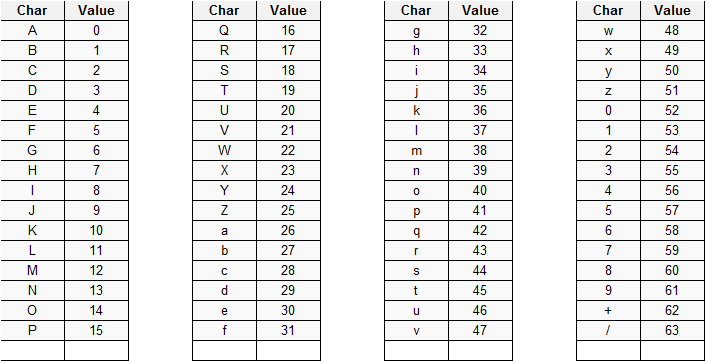 In the example we used a three byte word which can neatly be broken down into four segments of six. What if the word is four characters equalling 32 bits. Dividing 32 by 6 gives us 5 with a remaining two bits.

We can see this clearly using python (because, why not.)

In that case we need to pad out the base64 to indicate that the last segment is not complete.

The decimal representation of “Them” is 84 104 101 109 or VGhlbQ== in base64. As you can see there are two = symbols tacked on to the end. This indicates that there is two empty segments of 6 bits at the end of the encoding.

Looks like that works out perfectly, so where does the extra two segments of zero’s come in that generates the =’s?

The segmenting of eight bits into six bits cannot delimit or end half way between a byte. Meaning the base64 encoding must continue until there is no remainder. Let’s explore this again using just one character.

A pretty picture, too. 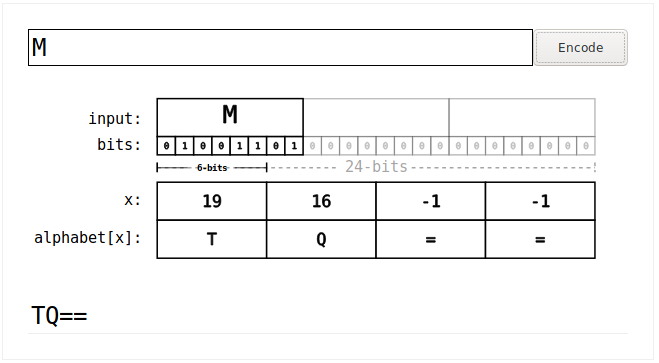 This example uses two equals signs but base64 can also be padded with just one as seen below. 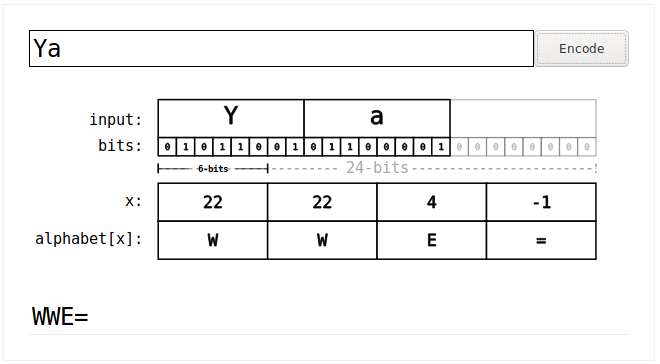 If you are wondering about the -1 in the columns, ignore them, its just how the JavaScript that powers the encoder has been developed. See Ty Lewis' CodePen to see it in action.

Base64 increases the size of the data transmission as more packets are required to be sent. So why use it? Base64’s genesis was in MIME (Multipurpose Internet Mail Extensions) where large streams of text are used to send emails and attachments.

In the early days of email, everything was plain text but the inclusion of HTML and attachments created problems. Email is sent as a stream and streaming binary, or hexadecimal could of had unintended consequences as some systems or programs may interpret binary incorrectly. For instance, a null byte in some systems may indicate that the message has ended when in fact it has not.

Today base64 is used everywhere on the net, mostly as a obfuscation technique. A poor one at that. Here is some more information on base64 in the modern web skewed towards infosec.

As always Wikipedia has an excellent page on Base64.

Shout out to Ty Lewis for his nice encoder which I have used for demonstration.