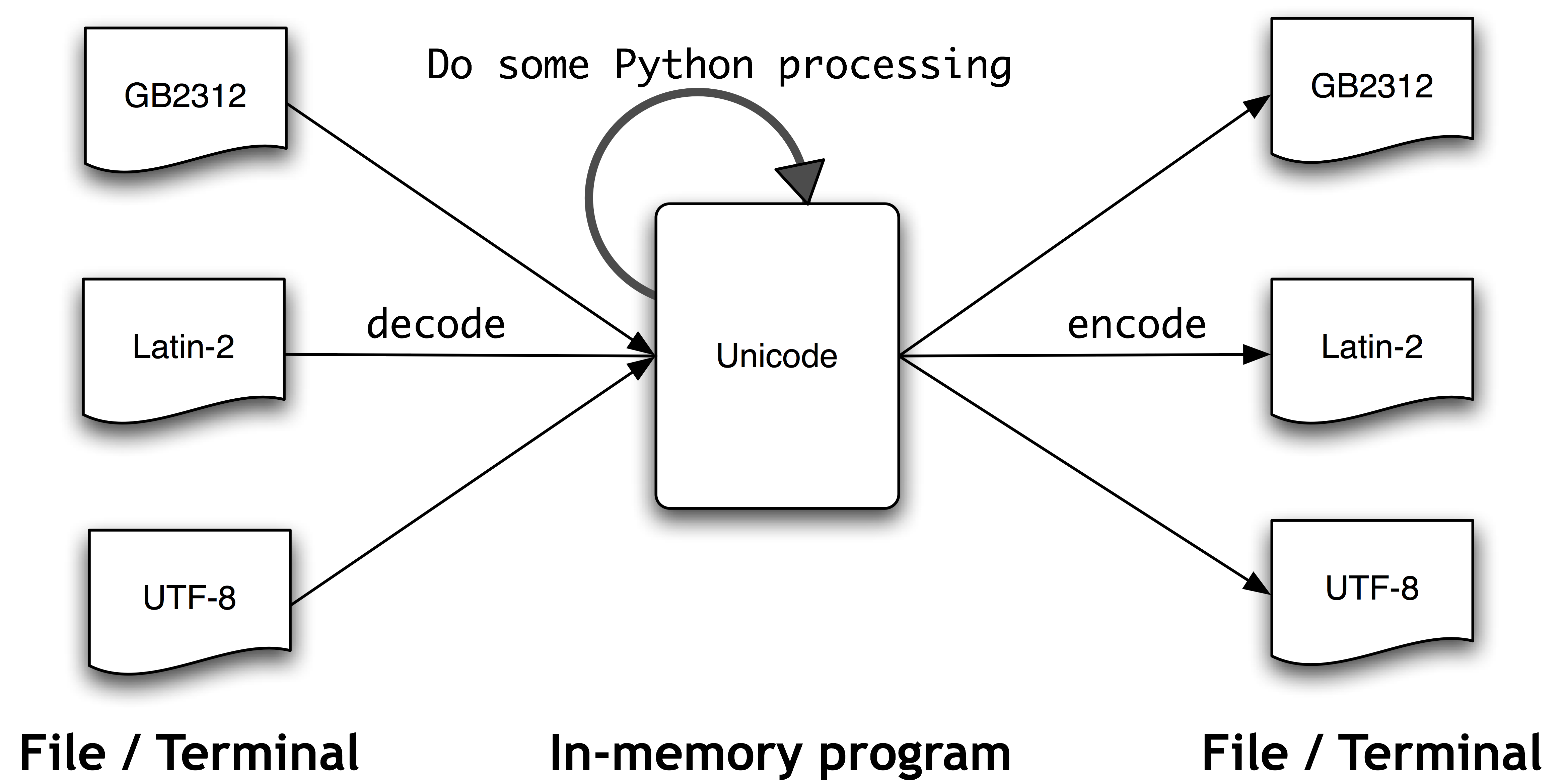 Python 3 is the new python, and python 2 should be regarded as legacy. But, it is still being used heavily and will likely live beyond its end of life. Recently, a project forced me to use python 2.7 within a Centos environment and I hit some small encoding issues.

In python there are two types that represent sequences of characters:

Python 3’s strings and python 2’s unicode instances do not have binary encoding. Therefore, the user must implement the conversion manually by encoding and decoding the between binary and unicode.

It is important that when constructing our program to deal with conversion between these data types that it is done at the furthest boundaries of our interfaces. This is sometimes referred to as the ‘unicode sandwich’.

This guarantee’s a level of compliance when accepting alternate encodings and a much stricter output encoding scheme - generally utf-8. We should not be doing any encoding or decoding in the middle of our applications.

This is of particular importance when dealing with file operations that are not text. In python 3, file operations do much of the encoding and decoding for you, returning str instances on read and write. But, python 3 will use the system default encoding where an encoding scheme is not specified. Much of the time we will receive utf-8 but on some machines this is not guaranteed.

If your application is expected to work across multiple operating systems and/or versions, you should set the encoding=<your-encoding type> keyword argument manually to prevent hidden bugs in the future.

Subtle differences exist between python 2 and 3.

In python 2 this will work as by default open use binary encoding. However, python 3 uses utf-8 instead. If we tried to run this it will raise a TypeError: must be str not bytes.

To make this work in both 2 and 3, we need to specify that it is binary.

Writing binary to a file must also be specified with rb instead of r.

Other interesting points between python 2’s str and unicode, and python 3’s str and bytes are how they are compared, or typed. In python 2, if a str is ASCII (7-bits) it will pass an equality check with unicode characters. They can also be combined using the + operator, and can be formatted using %s string formatting.

This means that in python 2 we could pass unicode or a str instance and expect the same result - if 7-bit ASCII. In python 3 str and bytes never cannot pass equality checks, not even empty strings.

Legacy python is still a thing, so having an understanding of how the encoding paradigms differ between each version is important. The differences in file operations can have significant effects within your applications, and is quite prominent in network level communications. Wherever possible work with str types inside your main business logic to alleviate any nasty surprises further down the line.

And have a read over some these gems regarding utf-8, which I deliberately did not go over in any detail.

Ned Batchelder’s How Do I Stop The Pain

Joel Spolsky’s The Absolute Minimum Every Software Developer Absolutely, Positively Must Know About Unicode and Character Sets (No Excuses!)